Our latest Facebook Q&A with Brett Voss was pretty heavy on the Game of Thrones talk. That’s because the Recording Arts grad works as a foley mixer/foley editor on the hugely popular HBO series. There were more than 300 questions asked during the Sunday night chat, covering everything from his start in the industry to his favorite aspects of working in sound. (One thing Brett wouldn’t do: give away any Season 5 spoilers.) Here are our 15 of our favorite questions.

Game of Thrones returns for its 5th season in Spring 2015.

How has some of the knowledge you’ve acquired at Full Sail transferred to your job on Game of Thrones and on other projects like The Last of Us?
BV: Full Sail taught me the basics. It taught me what I needed to do (and not do) to be successful. Being here in Los Angeles, working, and learning taught me the rest.

What has been your proudest moment on Game of Thrones so far?
BV: I really like anytime we get to walk Brienne. I just love how her armor and footsteps work.

When did you graduate, and how long did it take you to get where you are?
BV: I graduated in 2003, I think. January or February. Then I moved out here [to L.A.]. It took me three months to the day to get my first job, which was as a runner at Ascent Media, who then, owned Todd AO. Then, I did that for just under six months and became the runner at Todd AO Studios West. After about four years as a runner (read as: Yes, I was a runner, but I was supervising sounds, learning from editors, etc. on the side,) I started mixing foley for Jeff and Jim.

I plan on studying Digital Cinematography at Full Sail. Do you have any advice for someone who is just starting out?
BV: Learn all that you can. You’re paying to go to school. Do your homework. Do whatever extracurricular things are available to you. Immerse yourself. Make friends.

What is the weirdest everyday sound you’ve used and what did you use it for?
BV: Umbrellas can sound like dragon wings… 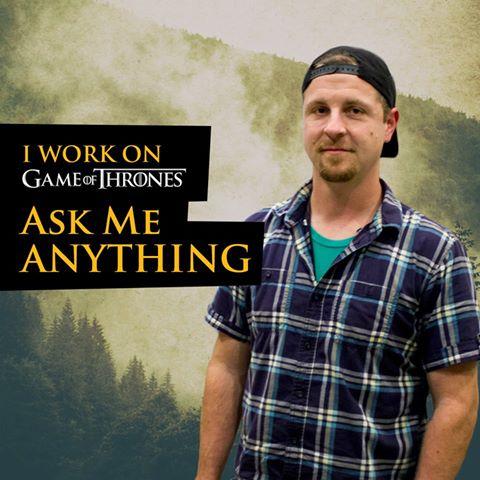 What are the main issues when you’re working on a show with such a huge cast and crew?
BV: Our group is rather small, actually. I work on post production sound for Thrones. On any given work day it’s just three people in two rooms making sounds. I mix/record/edit, and Jeff and Dylan are recreating the sounds that you hear.

What kind of process is used to create Daenerys Targaryen’s dragons? They are so lifelike and amazingly done.
BV: Visually or sonically? They look and sound great. Tim and his design team will create the creature vocals, and we add the footsteps and nails, wing movement … anything that seems like it will help. Sometimes we’ll work on the jaws snapping shut.

If you could repeat the best advice you’ve been given on the industry, what would you share with us?
BV: Make friends, not contacts. And pick up litter.

What’s the hardest part of your job? What’s the thing that you like most about it?
BV: The most difficult part is the most difficult thing to think of. It’s hard when one of us is in a bad mood. Otherwise, it’s pretty mellow and ridiculously fun. I absolutely love the days when Dylan, Jeff, and I are all in great moods.

What is a more challenging undertaking: working on a show like Thrones, where you don’t have to build the sound design from the ground up but it’s still a huge project? Or working on a video game that does have to be built from the ground up?
BV: It’s always different, but generally, I’d say video games. There are two different fundamental video game post sound processes: in-game and cinematics (or little movies running throughout). In games it can be quite repetitive. Cinematics are done a bit more linearly like any movie or television show.

As a foley sound creator, do you see the same scenes over and over again and do those scenes sometime stick with you for days?
BV: Absolutely. Theon on the X stuck with me for a few weeks.

I’m going to be working on sound/foley for a short film, do you have any tips or tricks?
BV: Do your best. Try to learn the “character” of each person you are walking. Do they stumble frequently? Do they scuff to a stop? Do they drag their feet? Learn that. Before you get on the show, go to the mall and “walk” everyone you see. Props are pretty easy. Walking is really what sets the best foley artists apart from the rest.

What was your first step after college?
BV: I moved to L.A. The second step was to come up with a game plan.