"Basically, I own camera cranes."

Full Sail Film graduate Ryan Elliott's understated job summary is both humble and concise, though the path that led him to success was anything but basic.

As a camera crane owner and operator, Ryan has accumulated an impressive list of credits on a diverse range of projects. Most recently, he's worked on The Voice, American Ninja Warrior, American Idol, and Comedy Central's @Midnight. Although he's based in Los Angeles, the job takes him all over the country; destinations currently on his docket include Florida, Indiana, Alabama, and Pennsylvania - and that's just in a single month.

Admittedly, Ryan is no stranger to travel. After moving from South Bend, Indiana to Orlando, Florida to study Film - and then graduating from Full Sail in 2004 - he moved with a fellow grad to Miami. Shortly after, a series of serendipitous connections allowed him to accept a traveling gig on an indie car circuit, then a contract position in Las Vegas, and ultimately a job out in LA, where he quickly broke out on his own. He now operates Moose Media, a company whose list of equipment includes three Jimmy Jibs and a super techno crane.

Full Sail: How did you find yourself purchasing your own cranes?

Ryan Elliott: There’s a church I went to back home in South Bend that was very theatrical. It was basically a staged show. They had this huge production for Christmas one year, and I called their director and offered to bring a crane out and operate it. Someone suggested contacting a local news station that had a Jimmy Jib triangle, so I called the guy at the station, who let me rent it for the church event. When I brought it back he said, “You know, no one in this station knows how to use this thing, and it just sits. Do you want to buy it?” He gave me a great price, and that was the beginning of everything. I had that thing paid off in no time, and as my workload increased, I bought more jibs. Now I have a pretty successful little business going.

FS: What sort of projects are available for an independent crane operator?

RE: In addition to big shows like American Idol, I’ve done a lot of kids’ shows for Nickelodeon and Disney - and hordes of music videos. I also get calls to work smaller corporate events, whenever they have live entertainment and want coverage of it. There are also award shows, commercials, and music festivals.

RE: The music festivals. I’ve seen all of my favorite bands and shot most of them several times. My client for the festival circuit is based in the UK, and the crew is a really cool, young crowd. I don’t do every festival, but I do Bonnaroo and Hangout. Hangout is by far my favorite, because it’s right on the beach. It’s like a work-cation! You’re around people who are there to have a good time. It’s not a high-stress environment like when I’m working on the live stuff. 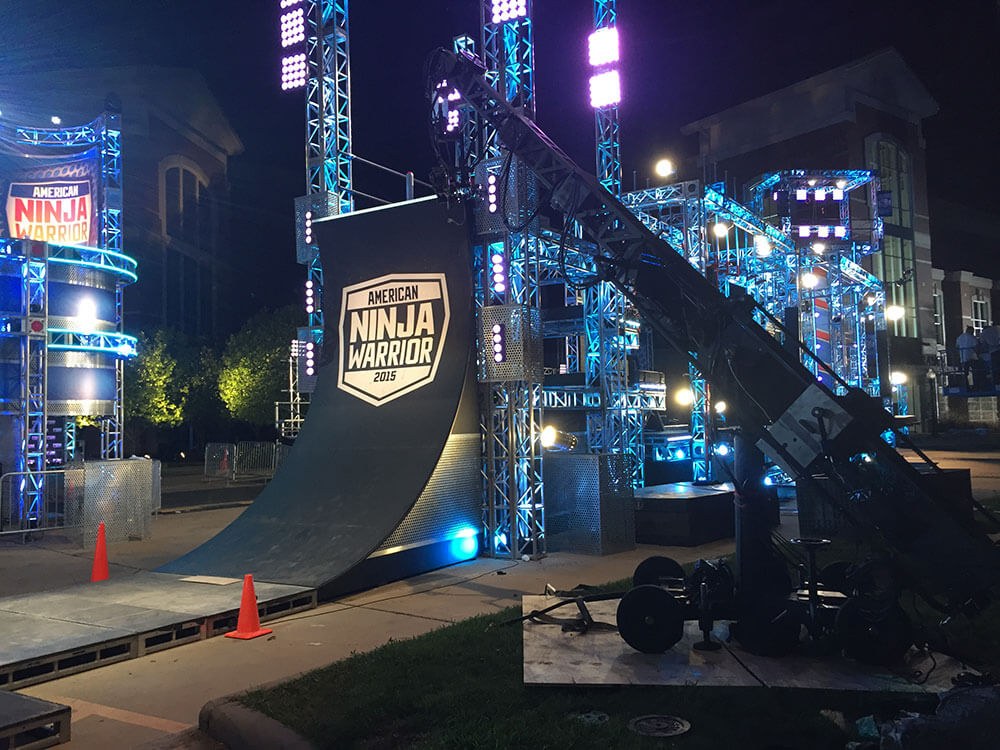 A techno crane on the set of ‘American Ninja Warrior.’

FS: How does working on a live show like The Voice differ from working on pre-recorded projects?

RE: For something live and production-heavy like The Voice, there’s a lot of rehearsal. You usually practice filming each contestant’s song three or four times to make sure all the camera angles are right. That takes a lot of stress off the director, because it’s a live show and anything can happen. A lot of times things will go the wrong way, and we have to follow the ball, but since the elements are all set, the director and the AD know what’s going to happen next. We usually rehearse two days before the show, and then on show days, we do a dress rehearsal. Then we go live for an hour or two, and we’re out of there.

RE: The less experienced guys are going to buckle under pressure. Everybody makes mistakes, even the good operators - but when you do, you have to get over it right away. Like, "Oops, I panned over a little too far to the left on that shot, oh well." You have to shake it off and focus on the next shot and make sure the rest of the day is good. As you do it more and more, the moves become muscle memory, and every show sort of starts to feel the same. You know what you’re looking for, for any particular situation or position or kind of crane.

You also have to be able to operate without looking at the camera. You hit a lot of hanging lights in the beginning. But after awhile, you get used to it, and you can just look at the screen and know where your arm’s at. And that just takes time and experience.

FS: What advice would you give someone looking to gain experience in operating camera cranes?

RE: Know how to put jibs together, or be willing to work for free until you learn. As someone who hires techs pretty regularly, I need to feel comfortable that I can walk away and discuss the shot with the director or the DP, and know that when I come back the jib will be built. When that happens, I can start paying. You come across a lot of people who are interested in cranes, but they fizzle out because they're not committed to the learning process. I started for free, just to get pictures and footage for my website. As I got better, I started charging more.

How to Build Your Personal Brand