Kevin Negandhi’s Four Tips for Jumpstarting Your Career in Sportscasting

Kevin Negandhi, ESPN SportsCenter anchor, recently visited Full Sail University’s Dan Patrick School of Sportscasting to talk about his path from Temple University student to sitting behind one of the best-known news desks in the nation. Interviewed by the school’s Program Director, six-time Emmy-Award winner and former ESPN producer Gus Ramsey, Kevin told students about the lessons he learned from college, his first few years in the industry, and ultimately while working at ESPN.

Negandhi can strongly attest to the power of writing and the opportunities it can present to you. In his first semester of college at Temple University, he immediately joined the college newspaper. “I had no idea what I was doing”, Kevin joked with Full Sail students, but his eagerness to learn landed him the role as the university’s new sports editor, despite his lack of previous experience. Kevin spent the next three years writing every day; whether it was an article, a column, or just notes after a game. His job with the school’s newspaper later led him to opportunities with the university’s radio station as the sports director and writing scripts for a local television station. When reflecting on his early years in college, Negandhi stated, “If you learn to write you can do anything. That opens the door to radio, TV and makes everything easier.” Using his years at Temple University to develop his writing and carry over that skill in his internships is what gave him a major advantage by the time he graduated college.

Negandhi’s first job out of Temple required him to move to Missouri to work on sports coverage at a local news station. His father questioned him on why he would want to work in the middle of nowhere making a small salary, but Negandhi’s response was simply, “Because I need to make mistakes everyday.” One notable memory Negandhi has from his time in Missouri was his first solo interview with Tim Floyd, then head coach at Iowa State. When Negandhi returned to the station to play back the interview, he realized he used the wrong audio and the whole interview was unusable. Making those little mistakes are what gave him an advantage throughout his career, as they all provided learning experiences. Negandhi encourages students to remind themselves that everything is going to be okay and not to worry because you can get the next thing that comes your way. However, if you don’t learn from your wrongdoings, it might hurt you even more the next time a mistake happens.

Create Your Own Opportunities

Negandhi was a man of opportunity ever since he was five years old. If he wanted to have a conversation with his dad, he found that he had to read the sports section of the newspaper to have something to chat about. Just like he knew to look for the opportunity to have a conversation with his dad, Negandhi was even more optimistic when he made it a goal to become the first Indian-American on SportsCenter. As Kevin was working his way through school, he realized that although the classroom was a great learning environment, it wasn’t giving him the opportunity to advance to the level he wanted to work toward. What he was lacking from his education was the opportunity to build relationships and connections with people in the industry. Negandhi miraculously found a way to “rig the system” and participate in five internships while attending school. Those internships included opportunities at a sports radio station, as a producer, and with TV stations. By the time his classmates were just starting to look at internship opportunities in their junior year at Temple, Kevin already had years of experience under his belt and secured real paid positions with local markets.

The importance of constantly seeking feedback regardless of what stage of your career you are in is a point Negandhi stressed during his talk with students. When first starting out as a broadcaster, he would constantly send his tapes to five mentors for feedback. Not only does he continue to turn to his mentors, but he also criticizes himself by re-watching his tapes. When watching his tapes, Negandhi has three different ways he analyzes them. Once, muted, to observe his body language and nonverbal cues, then again with the sound on but his eyes closed to listen to how he presents the story, and finally he watches the piece all together to see if there is anything he missed. Negandhi highly recommends that you seek out people you trust to give you honest feedback because otherwise people just assume you’ve got it all figured out. Negandhi always constructively uses criticism from his mentors and himself to think of new ways he could keep his performance as simple as possible. 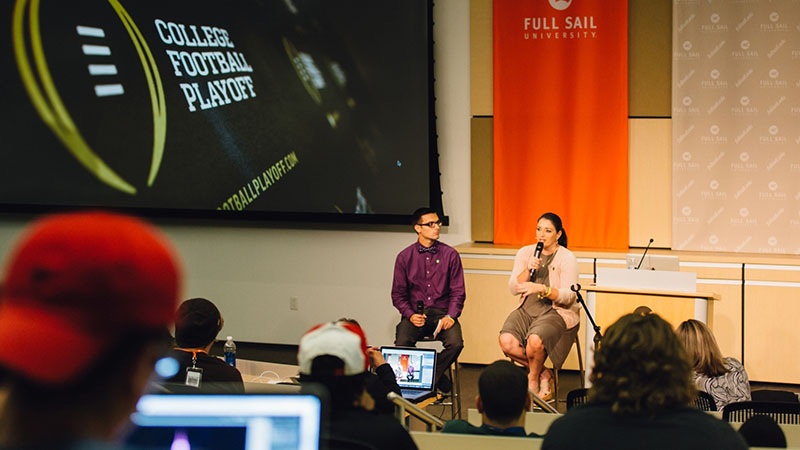